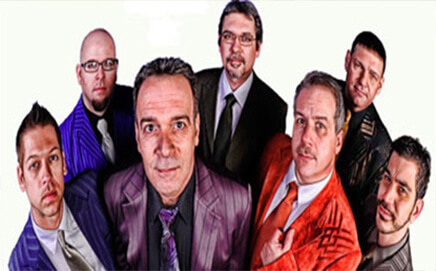 Thank you. Marty and the band did a great job. - Ball-Fundraising event

They were fantastic. I told the group they would be first on my list to call next year. They played to our crowd and everyone loved them. -Caren D'Amico, Corporate Event

At first it was just a steady weekday gig in 1998 at a small swing club in Pittsburgh’s south side, just a side project. All the musicians had good weekend work in other bands. But the band grew in popularity and soon they were packin’ em in. The crowd listened to Dr Zoot but Dr Zoot also listened to the crowd and were exposed to new influences. The dancers and musicians came every week, it became a scene. Sal began writing originals for the band and encouraged the other musicians to write horn charts or chord changes and bring them to rehearsal. Ideas flowed freely, and the new songs and arrangements were really happening. It became everybody’s main band. Week after week the band rehearsed, wrote and gigged.Then it was time to record.

By the time Dr Zoot’s first CD “Ghosts of Swing” was released they were playing the city’s largest rooms nearly every night of the week. It seemed time to take the show on the road. Dr Zoot began playing some out of town shows. At first Harrisburg and Hershey and then Philadelphia. They were very well received in these markets. Their music caught the ear of someone at Slimstyle Records and a Dr Zoot song called “Jump Jive and Shake” was placed on the very successful compilation CD “Swing This Baby vol. 2”. This opened up more doors for the band including gigs in New Jersey, Washington DC, and eventually to Los Angles and New York City.