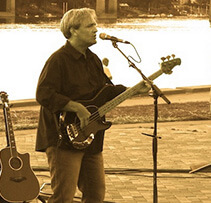 "Jeff and Airborne were fabulous! It was an amazing party and EVERY person in attendance loved it! The grandmothers were even dancing til the end of the of the night. Marty Mundy was a great help and Jeff and everyone in the band was a delight to work with. Thanks for helping to make the weddng so great!" - Dale & Lynn Lazar

"Jeff Jimerson was so easy to work with. He called us several times and made the process easy. He allowed my husband to perform for his relatives. And he chose just the right music to get the crowd dancing, and he contacted the cocktail keyboardist and worked out the arrangements as to who played when. Loved, loved him and his band!!!" - Margaret Amelio

"The music was the most important thing to us & Jeff & Airborne EXCEEDED our expectations. They learned several of our important songs, which I know most bands wouldn't do. Thank you Jeff!" - Ashley Moss

"Jeff was awesome - very professional. Definitely would use again if I needed a band! My daughter & [her] husband live in NYC & they trusted me to select the band for them - they were VERY happy & all freinds & relatives from NY said they were great!" - Debbi Hays

"I cannot say enough good things about Jeff Jimerson & Airborne. They were professional, on-time, and Jeff was fantastic to work with. But more than anything else, they were the best band we could have ever hoped for at our wedding. It is a group of incredibly talented musicians with both range and enthusiasm. EVERYONE had a great time on the dance floor, I could go on and on but there is no need - I would hire them a hundred timed over and over if given the chance. Man thanks." - Tad Lehmann

"Jeff Jimmerson absolutely MADE the wedding. The music was the core of the event and the band kept the evening flowing smoothly all night. We LOVED them and hope we have another opportunity to hear them again soon." - Compliment Wedding

Airborne Song List
This is a first class group of professional musicians with one goal…..to make your event a success! With music styles ranging from the 40′s to today’s hottest hits, they can do just that!

Airborne has been together since 1990 and have been performing individually throughout the tri-state area for over twenty years.

Jeff surrounds himself with an extremely talented group of musicians and vocalists that help make Airborne a complete package. Experience for yourself….Jeff Jimerson & Airborne

Jeff Jimerson is regarded by many as one of the finest vocalists Pittsburgh has ever produced. He is the primary National Anthem singer for the Pittsburgh Penguins and has also performed for the Steelers and Pirates. Appearing on several local compilation CD’s, he is a regular feature for seasonal fundraising events such as WTAE-TV’s Bundle Up Project, KDKA-TV’s Children’s Hospital Benefit, the 3WS Oldies Mass and WDVE’s Toys for Tots Benefit. Jeff is also an integral part of the “B.E. Taylor Christmas Show” performing annually throughout the east coast including their sold out shows at Heinz Hall in Pittsburgh. His voice can be heard on several radio and television commercials and in 1997, appeared in the movie “Sudden Death”, starring Jean-Claude Van Damme.