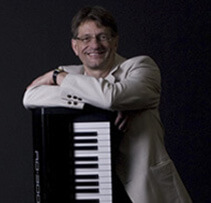 Jerry Coleman has been entertaining audiences

Jerry Coleman has been entertaining audiences with his musical and vocal talent for many years. He led a number of popular bands during his early years in music and was a recognized stand-out on keyboards and vocals.

In 1987 he was hired by Warner Brothers recording artists, The Vogues, as a lead singer (“5:00 World”, “My Special Angel, Turn Around, Look at Me”, “You’re the One”) and performed with the group for seven years.

Jerry also performed for seven years as keyboardist and vocalist for The Jaggerz famous for their 1970 number one song, “The Rapper”.

His repertoire is vast and eclectic, spanning decades of music from old standards to current pop, show tunes, country, ethnic, patriotic and more, and an album of original music is in production. Most of his current work is performed with partner Randy Eugene, and he has recently also teamed up with the great Joel Lindsey, guitarist/vocalist from London, England.