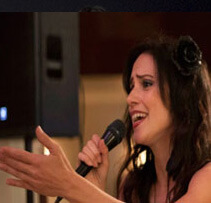 Carla first performed when she was just 4 years old at a party where guests filled a Styrofoam cup with money upon hearing her sing. From this early beginning, music has always been her passion. Seeing a piano in a Tom and Jerry cartoon, Carla felt a calling to play the instrument and began writing songs at the age of 10.

While attending New York University, Carla landed a publishing deal with Jellybean Benitez of Jellybean Productions, Madonna’s producer. Her first single, “‘Not This Time”, was released on Atlantic Records. During that time, Carla had the good fortune of writing with many of the best such as Narada Michael Walden, Judd Friedman, Reggie Lucas, and more. As a recording artist, she had a single’s deal with RCA Records, a demo deal with MCA records, and a 6-album deal with the soon-to-be defunct Savage Records. Carla relocated to Los Angeles and landed the role of Maureen in the Tony award-winning musical “Rent” in the West Coast Premiere and later on Broadway. She worked both On and Off-Broadway in many cutting-edge shows like “Spring Awakening”, where she originated the role of Wendla working with Duncan Sheik in its early stages. During this time, her song, “The Lover That You Are” was covered by Pulse and went to #1 on the Billboard Dance charts, also winning an ASCAP award. “Music Takes You”, the follow-up single, also went top ten. Carla wrote the semi-autobiographical musical “Kaleidoscope”, which was selected for the prestigious ASCAP/Disney musical theater workshop in LA directed by Craig Carnelia/Stephen Schwartz.